Yikes! Christms Eve brought 2 earthquakes in the afternoon. The first one had a couple jolts and scared me. We got under a doorframe and our cat scampered on the hardwood to get behind the couch. Then there was another one a bit later which was shorter. Our cat spooked again and ran under the bed. I can imagine the chaos of pets getting lost after the earthquakes here, and a postgrad student in my department actually just published a book on this topic with heartbreaking stories of owners searching for lost pets. I discovered I really don't like having to move around while the earth is moving underneath me. We feel fairly secure in this house, seeing as how it withstood all of the rest of them, but the many cracks in the ceiling are a constant reminder of the stress it has taken. These were only the second quakes I've felt (first one was in California while I was asleep so by the time it shook me awake it was over). After recovering from the first one only to have another one come a little while later, I now have more empathy for the folks here who went through not only the big ones in 2010 and 2011, but many aftershocks that probably rattled them every time. It was weird timing coming on Christmas Eve.

Even though we are careful about acquiring too many things since we won't be able to take most of it back with us, since we are here for a while and it's hard not to, we got each other a couple presents for Christmas. D got me some wall hangings, a sweet Shakespeare puzzle, and of course a bird feeder and seed. He also got both of us Civilization: Beyond Earth which is a new science-fiction-themed version of our favorite computer game that has fun alien siege worms and other science-fiction elements. I got him some international-food-section candy and a cast-iron tortilla press and corn flour. His parents got us some travel gifts: Hobbiton movie set tickets and passes for the inter-island ferry so we can get our car over to the North Island to explore. Hobbiton sounds so cool - we will be going there soon and will definitely be posting pics!

I think this is the first Christmas where I've ever been able to wear a tank-top. Also the first one where I went on a walk on a beach. Several people had recommended a place called Taylor's Mistake where all these old holiday homes still exist -- they call them baches (pronounced "batches") - - so we had a nice drive along the coast to get there. It was super windy, but very sunny and warm with lots of other people out enjoying the water and weather. I plan to return and have a picnic soon. 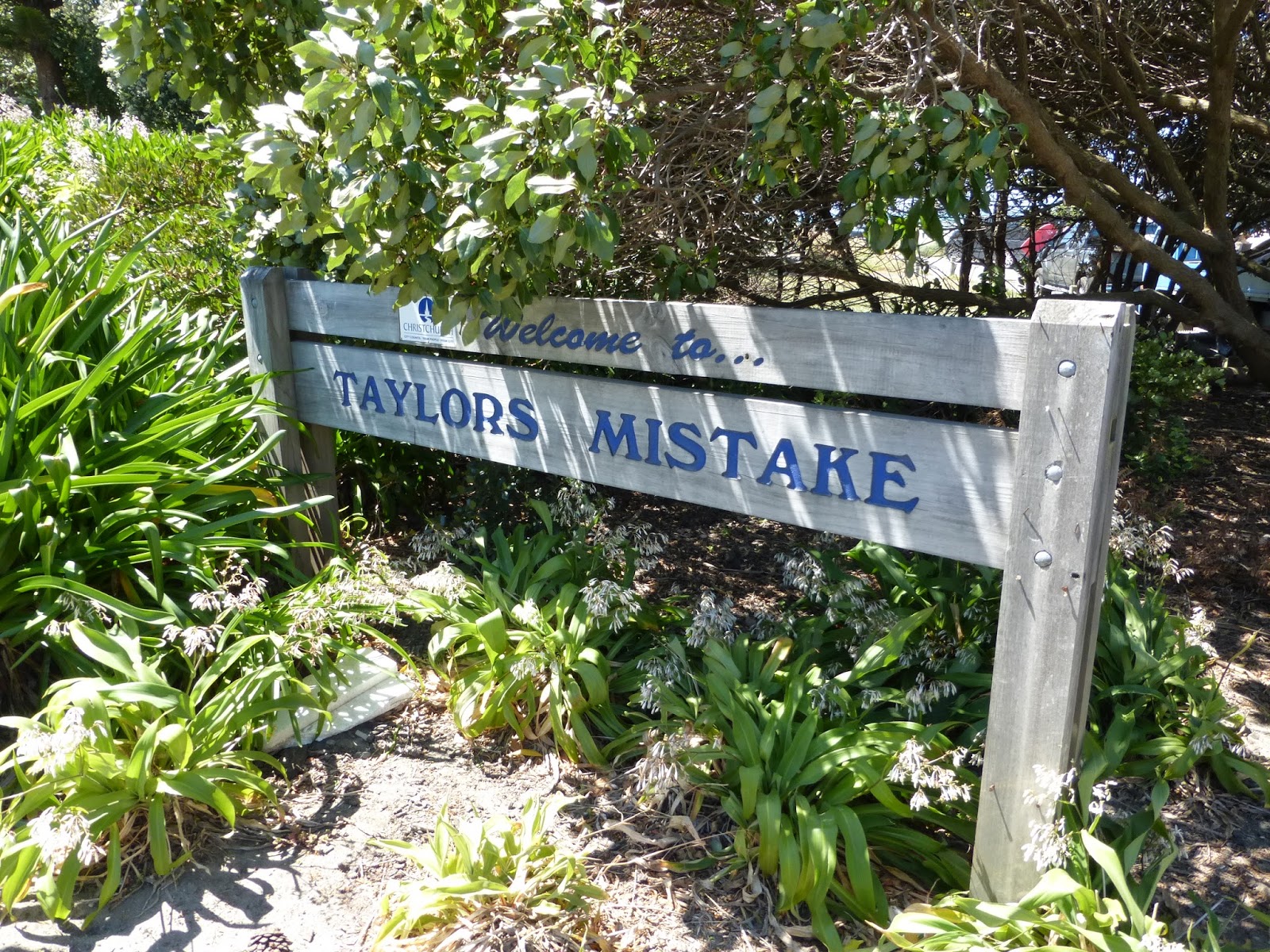 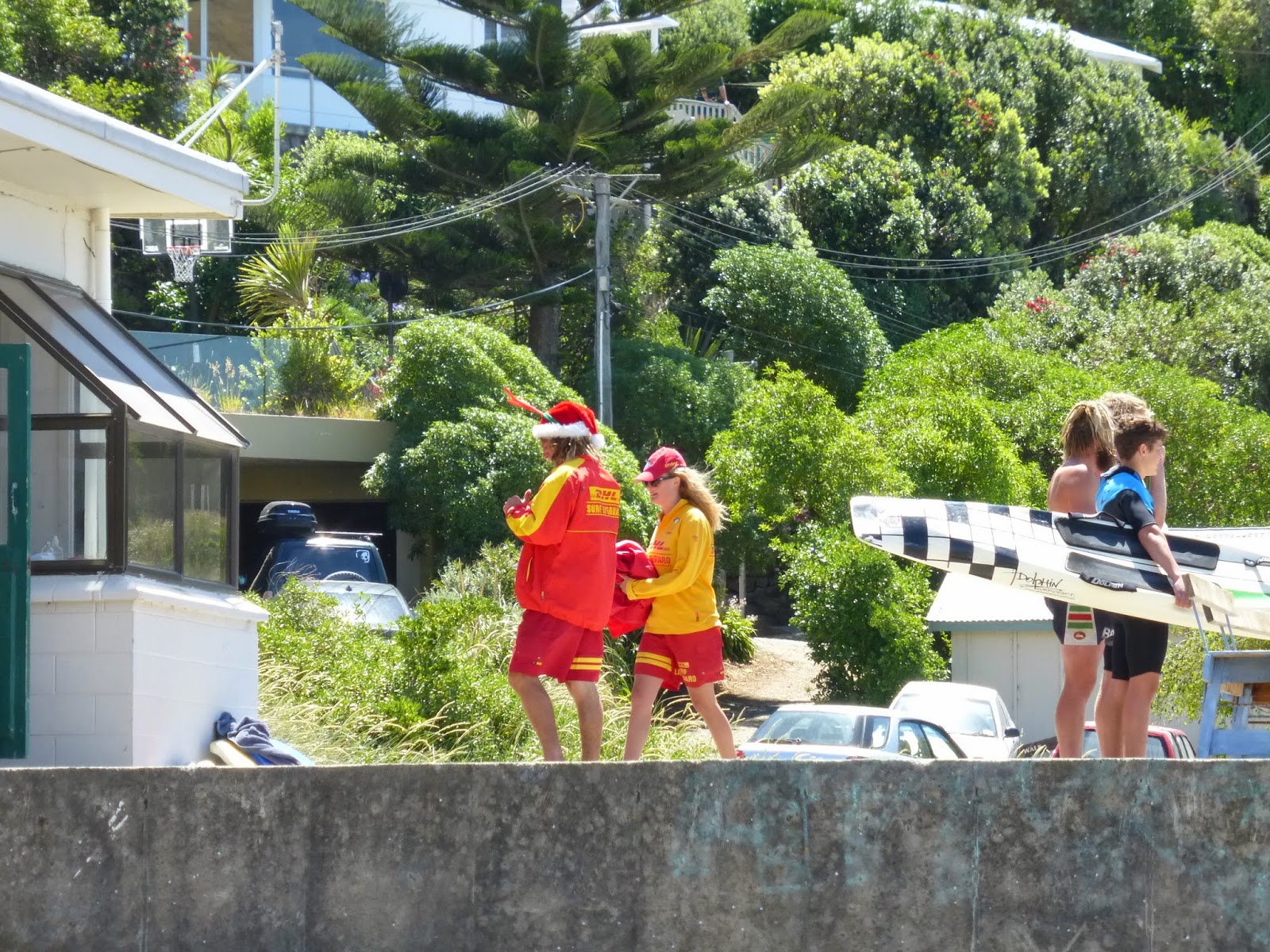 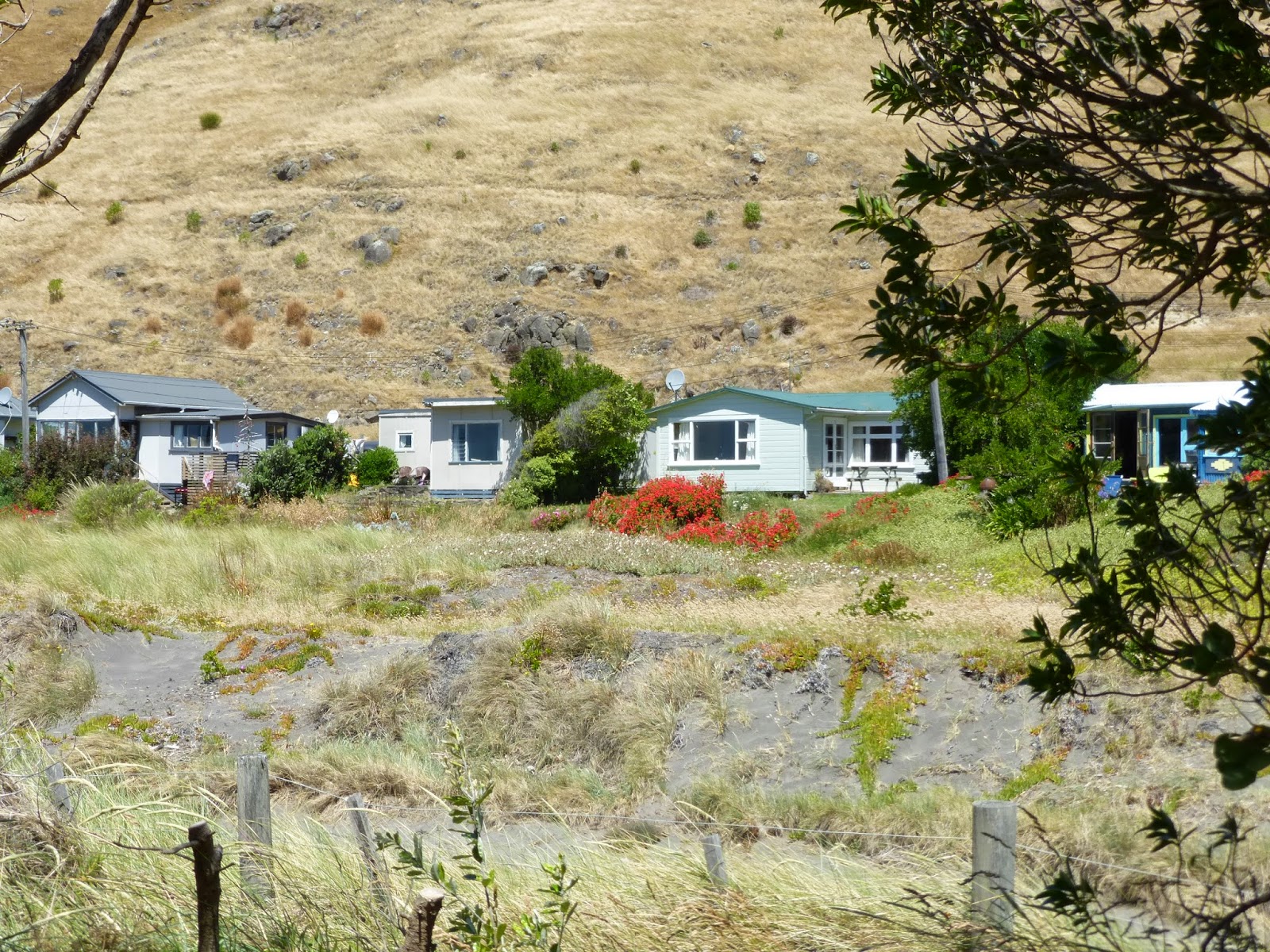 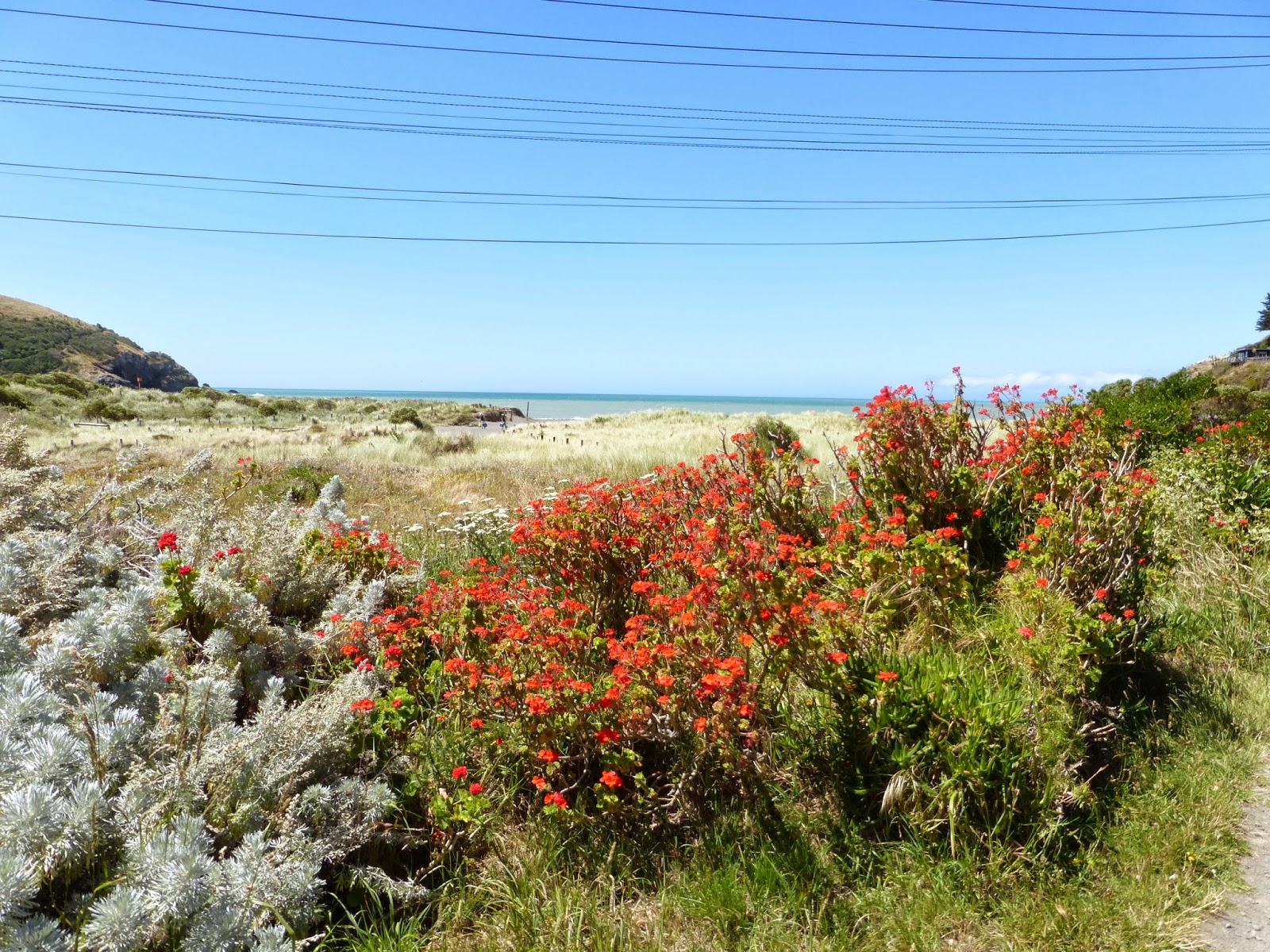 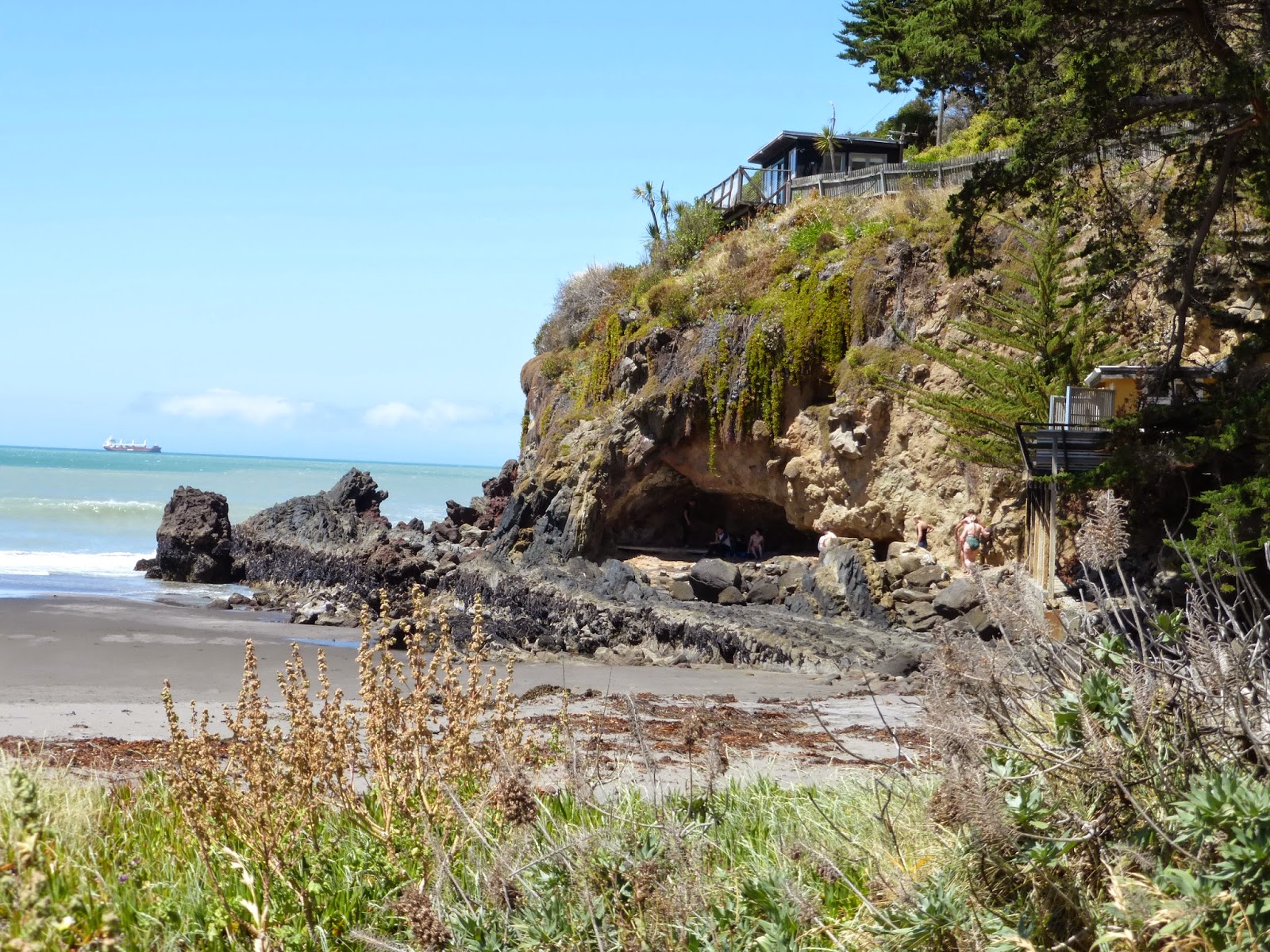 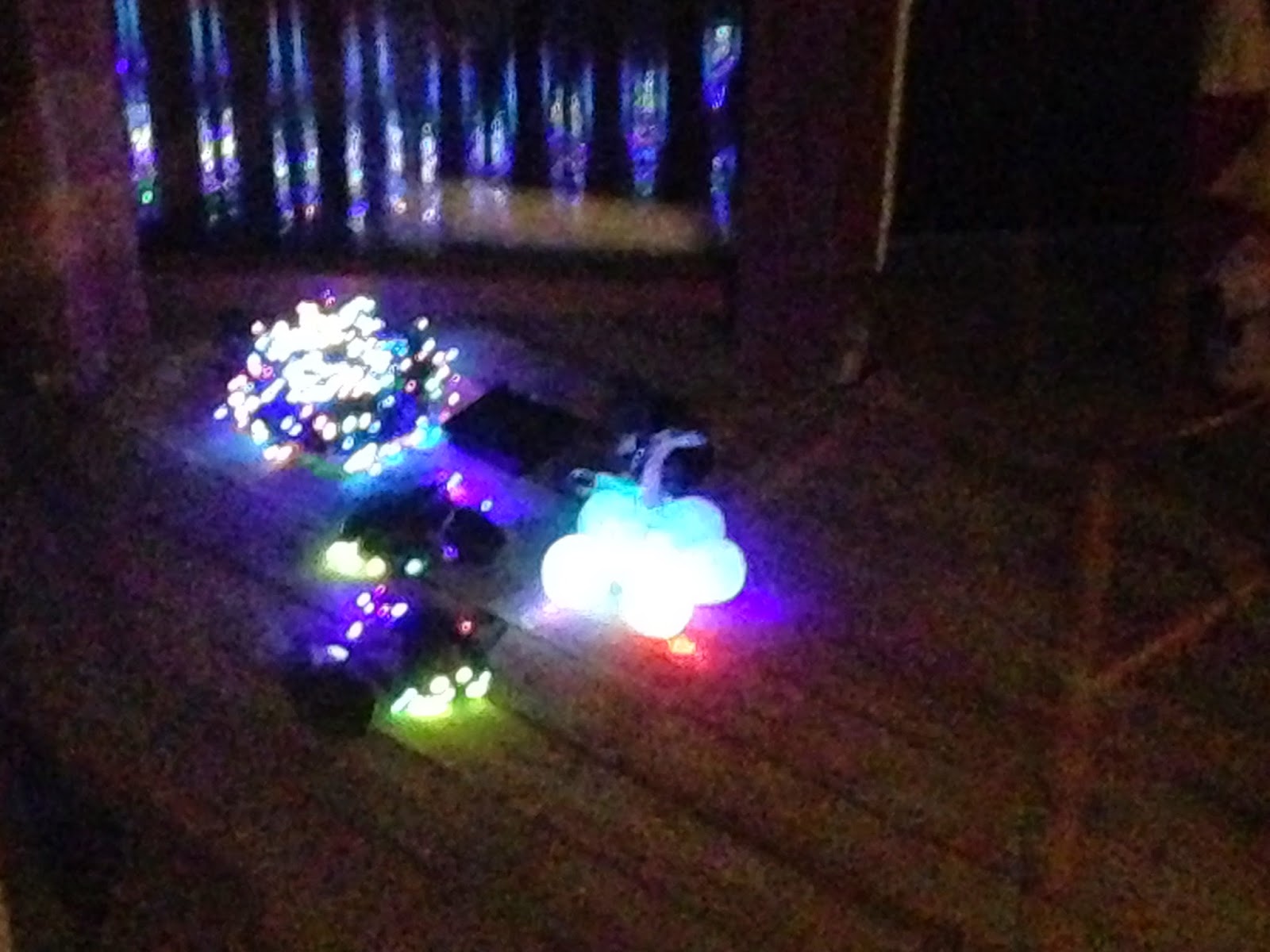 Sales weren't very good. The only thing I found were some beach towels on sale at Bed, Bath, and Beyond. Gearing up for that picnic! We did get some lights at K-Mart. For some reason, almost all of the holiday lights here are solar-powered or battery-powered. And they are LED so the big strands were still $27 even at 50% off. We got some smaller strands and tested them out -- they worked! I guess the upside of solar is that you don't have to pay for power. The 6 balls change color too. I can't wait to decorate next year! :)

Next we saw Big Hero 6 at the movie theater. This time the employee let us pick our assigned seats -- we told her that we don't have those in the U.S. and she was shocked and said she wouldn't like that at all. We emphasized the importance of having buffer seats, but I still don't think she was convinced.
Posted by Tui at 9:26 PM No comments:

We joined the ranks of the workforce this week, having both been accepted to be notetakers for the disability center on-campus. This is nice because you get to sit through a class in your field and take notes for students who are otherwise unable to take their notes. You get to learn and get paid for it. Not too bad a deal. We had to apply for an IRD (Internal Revenue Department) number at the post office, and it was a surprisingly easy task. The form was two pages long and just required copies of our passport and student ID. The lady processed the forms, gave us a receipt, and said to expect our numbers in the mail in about a week. What won't be so simple is figuring out all the tax stuff, but we'll just have to wait until the end of their year (March 30) to deal with that.

There were two holiday parties, one with some of the arts college's departments and the other with a small group of postgrads. Unfortunately, the first party suffered from the typical clique problem where each department's people just sat at their own table and didn't interact or leave room for anyone else. The second party was at a vegetarian restaurant which suffered from the dinner party problem where you may or may not be seated next to interesting people, and you never get the chance to talk to anyone from the other end of the table. Perhaps because the university has a small but growing animal studies research group, we have been encountering a large proportion of people working on animal rights-related topics and bringing them up in conversation. One lady was against the concept of pets and another was a vet who believed all vets should be vegans. I'll admit, hearing these new points of view has made me think more about humans and their relationships with animals than I did before.

With the new year just around the corner, I decided to ask the head of school for a meeting to discuss some of my frustrations at the lack of communication and events for postgrads in my department and others in the arts. This was the professor I met the first week I arrived whom I knew it would be advantageous to have talked with, and I was right. I felt comfortable going to him and we had a great meeting going over my concerns and coming up with solutions. As I suspected, he already knew a lot of what I was saying was happening, but it took someone speaking up about it to put it back as a priority on his huge to-do list to revitalize the school. I'm encouraged that the next few years will see the build-up of a strong postgrad community that supports us and reflects well on the school.

We saw our first movie here, The Hobbit: Battle of the Five Armies, which came out ahead of the U.S. release for a change. On this side of town, the movie theater is actually reasonably priced at $10 a ticket, and the theater was very nice with stadium, comfortable plush seating. The weird thing was they have assigned seats - which we didn't realize - and someone came in and made us move because we were in their seats. This system makes sense to give an incentive to buy tickets in advance online so you can get the best seats, but it was ridiculous in the huge theater to have all of us bunched up together in the middle. We moved over one after the movie started to avoid a smelly guy - it's called a buffer seat people! 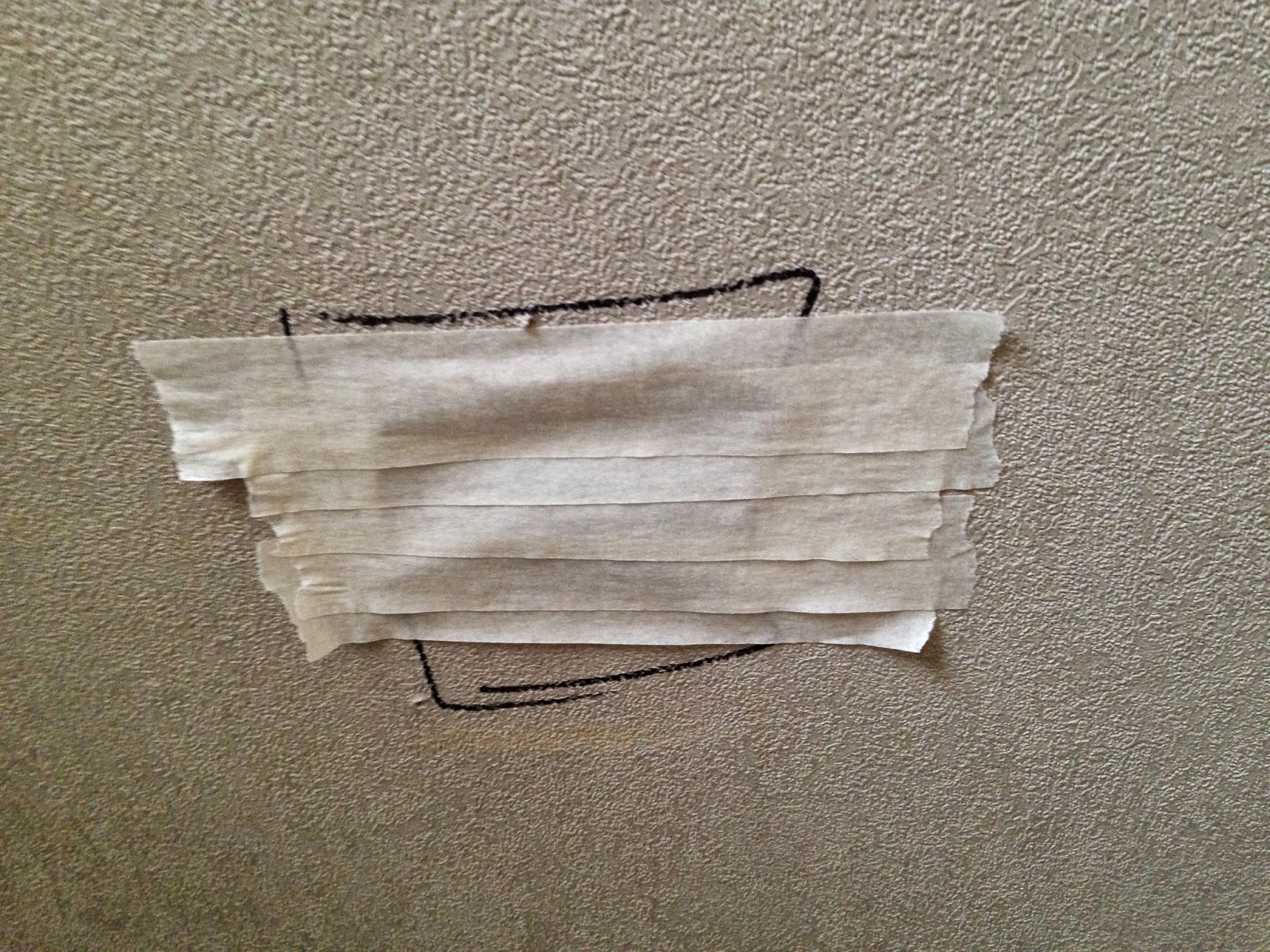 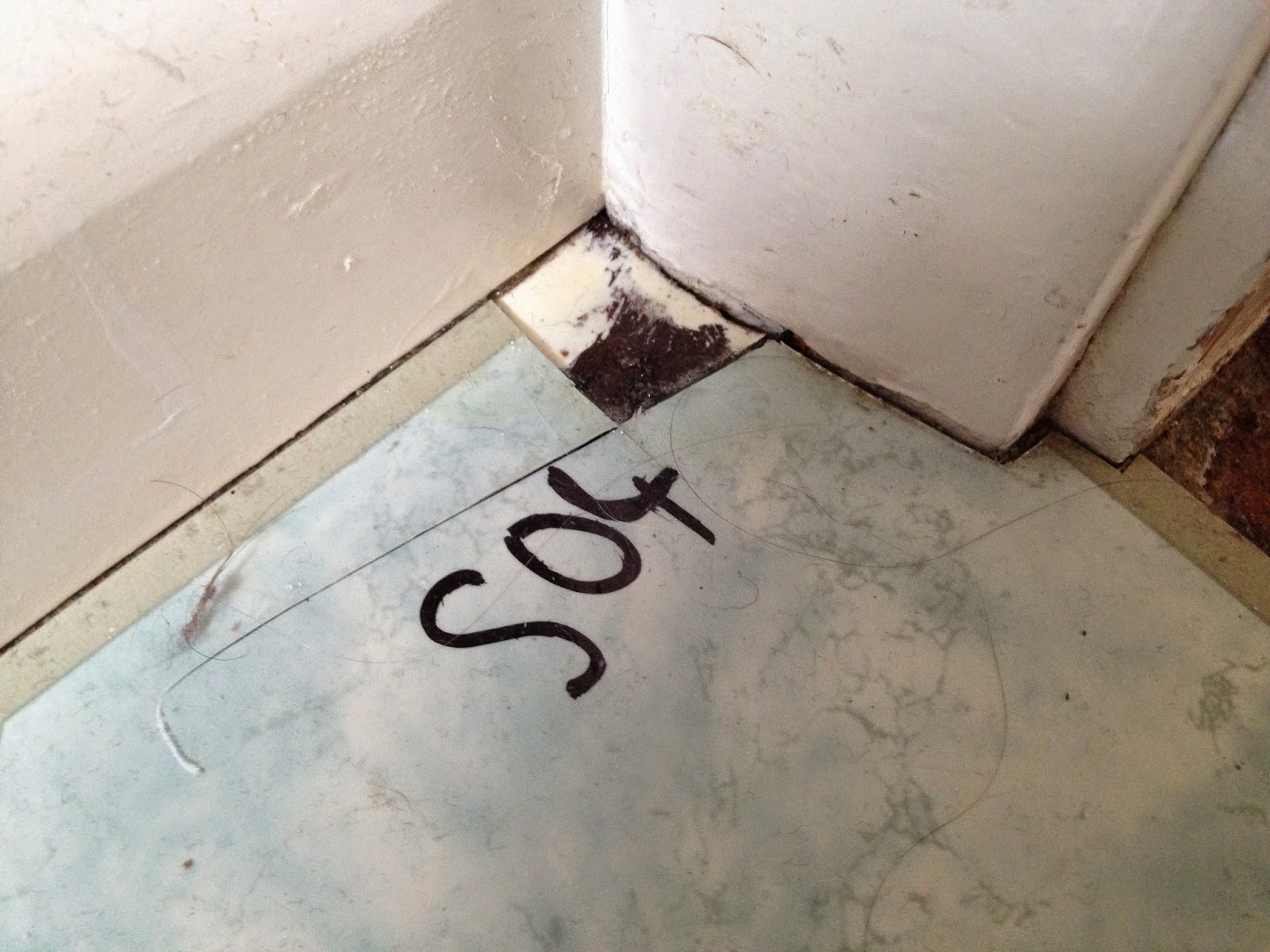 At the house, we had another visit by insurance inspectors. After about half an hour of walking around and making notes, one of them showed up on the porch wearing a haz-mat suit and told us that we should stay out of the house for the next hour while they collected samples from walls and ceilings. We said we really didn't want to leave for an hour, so they compromised and worked on one side of the house at a time with a door shut. (Hopefully they don't find anything hazardous!) So now there are masking-taped-up patches all over, as well as numbers in Sharpies so they can match photos to rooms. No care taken to make the holes in inconspicuous places - I don't think this would fly in the U.S.


We bought a 32" LCD TV at a garage sale for $100 which was a really good deal. Americans just need more than 1 television, I guess. A gift of fruit mince pies was given to us, and though I tried the raisin and apple-filled treats, they are just too sweet and weird tasting for my palate. I think you have to have grown up on them. Having to buy medicine for D since his back went out, I was reminded how expensive medicine is here and how I should have brought more with and wish someone had told me how crazy the prices are for even regular stuff like pain relief. Thankfully there are generic versions of aspirin and ibuprofen, but most other medicines and anything name-brand is at least $1 or more per pill. 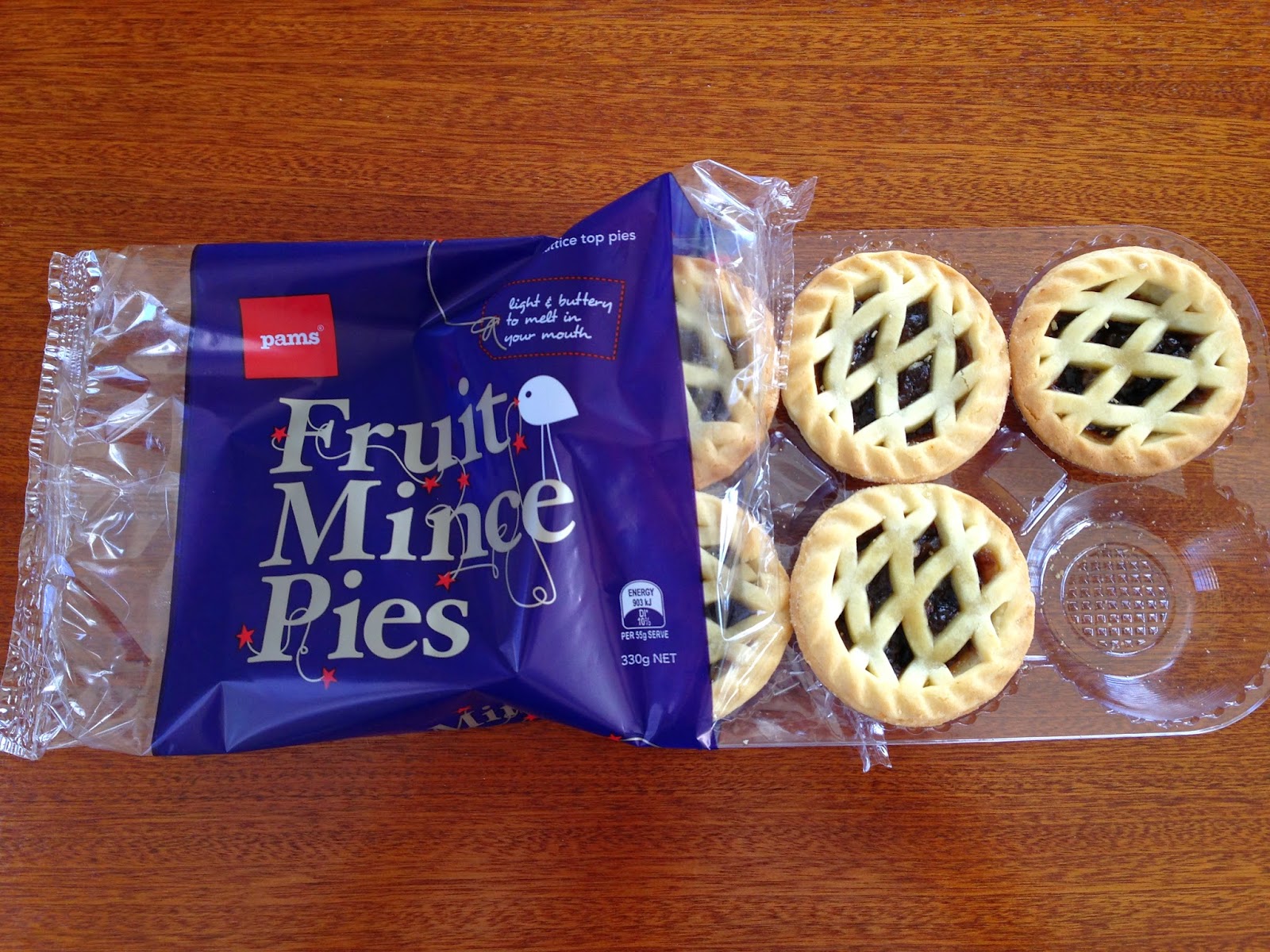 Although not many people decorate for Christmas, there is a website where people can put their address if they do put up lights and want others to come see them. We drove about 10 minutes to a suburb with a lot of postings and saw several really nicely decorated houses. A couple even had signs saying come on in and see more, so we stopped at one and had a nice walk around the house full of lights, trees, ornaments, and other decorations. Definitely made me sad we couldn't bring any of our decorations with! 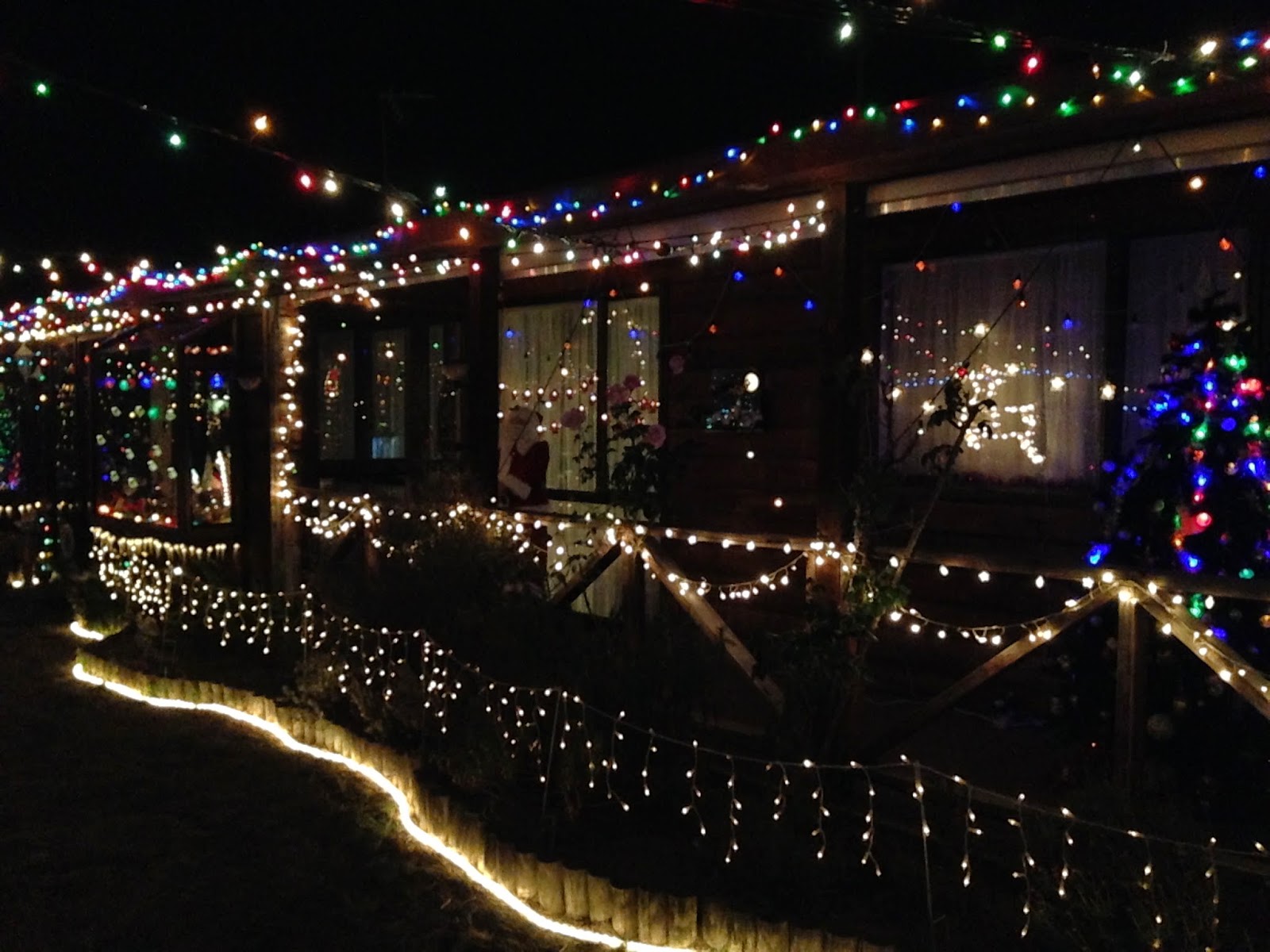 I met several new students this week, and the conversations began with my prompting, so I'm discovering how easy it can be to make acquaintances in a new place if you just put in a little bit of effort and initiative. Granted, I started the conversations knowing they were probably Americans so we had something in common, but it turned out we shared other interests as well.

After hearing one young lady discuss her love of baking, I noticed she said "cookies" instead of biscuits, so I asked her where she was from. Turns out she was from California but has lived here for many years so her accent is a combo American-New Zealander. She was already walking with another young lady, so I met her as well and she was from Britain. We all stopped and chatted for a bit about what we were studying and then some of the cultural differences we had encountered. It ended with friending on Facebook which will hopefully enable some future hang-outs.

Later in the week, I had been breezing through Dune Messiah in the student lounge at school and was getting up to go to lunch when I overheard an American couple eating lunch nearby. They were talking about the housing crisis and someone they knew who was being too picky about the neighborhood (I had to agree with them - you can't afford to be picky in this city). I decided to ask if they were Americans since they sounded friendly enough. Sure enough, they were and even better, they were from San Diego so we got nostalgic together about the good and the bad of living there. It had been getting too crowded for them so they opted for a big change. We exchanged info and they are actually living just one suburb away from us. I am proud of myself for taking some risks and glad to have been rewarded with some new acquaintances from other departments. You never know what one conversation can spark!

My meeting with my supervisors went very well. It is nice to be able to talk science fiction on an academic level with people who really know their stuff. And to get a generous chunk of time in which to so: three-hour meeting! It goes by fast when you're jumping from books to theories to movies to culture to education and so on.